dbt has established itself as a great tool for empowering analysts to take ownership of the analytical layer in the data warehouse. The era of data transformations based upon unversioned stored procedures and unreadable Python code is finally over... Not so fast!
Usually, people don't like to change the way they work. And it seems that some Analysts really love stored procedures and spaghetti code. Hence, for increasing adaptation of dbt, it's not enough to point out its benefits over the "traditional" way of doing transformations. It's also crucial to make the life of users (i.e. often times Analysts) in your org as easy as possible when introducing dbt. A smooth deployment to production is central for this. Your best bet for that is probably using dbt cloud. However, if you can't do that, there are some good alternatives out there.
In this post, I present a tested step by step solution, that has worked great in my experience. You might want to give it a try if you are on AWS and are looking for a reliable and maintainable way to let users deploy their dbt models into production and run them on a schedule.

The simplified architecture diagram for our solution looks like this: 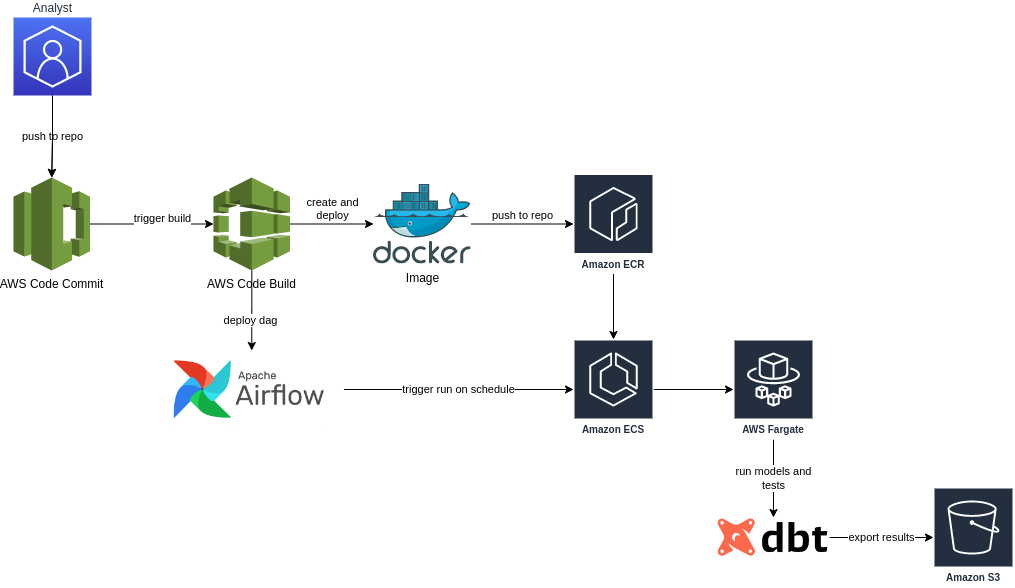 From the viewpoint of an Analyst deploying a model into production (obviously first into dev) is as simple as doing git push. Hard to beat this!

While this solution strives for maximum simplicity of usage, the implementation itself is a bit more tricky. But worry not fellow Data Engineer, we'll go through the central parts together. Everything is implemented as IaC using Terraform. So, instead of showing you where to click in the AWS console, I'll share the Terraform configuration.

First, let's configure the Docker image that will later be deployed to AWS ECS and in which dbt will be executed. Here's the Dockerfile:

To be able to run dbt, we basically just need Python and git. After we installed Python, we install the required dbt packages via pip. The requirements.txt looks like this:

Now, let's look at scripts/run_dbt.sh which is the script that will be invoked when running the Docker image:

I guess, there are numerous ways to achieve the first one. But most of those will be unsecure. For example, storing your credentials in the Dockerfile itself is a bad idea. I'm sure you can find many more anti patterns. Instead, what we do here is get the credentials in a secure way at runtime. To do so, we query a AWS Glue Connection (you'll need to create this before) via Python using the service role of the task that the container is run in (more on that later). You could also query the Secret Manager, Parameter Store etc., if you prefer to save your credentials there. Just make sure, that the used service role has the appropriate permissions to access those services. Then, the Python script writes the credentials to a file (.redshift_credentials) that looks like this:

Finally, we source this file using . ./.redshift_credentials so that the credentials are exported as environment variables. They will later be picked up by all dbt commands when reading the dbt/profiles.yml file. In the last step of scripts/run_dbt.sh, we copy the artifacts that dbt creates after dbt run (manifest, lineage), dbt test (test results) and dbt docs generate (static index.html page containing the docs) to a S3 bucket. With those files, we can either directly host the documentation using the exported index.html. Or, we can export the .json artifacts to a data governance tool like DataHub which can create documentation from several sources and projects.

The dbt configuration is pretty trivial. We have a dbt/ directory in our repo's root directory containing the standard dbt project skeleton. We only need to adapt the dbt/profiles.yml file, like so:

This sets up our db connection using environment variables. Notice, that we don't have different entries for dev and live here. Instead, the environment variables will be populated with different values in the separate deployment environments. This is because our dev environment is in a different AWS account then live. As such, the AWS Glue connection that we extract the credentials from will also refer to a different db. For local runs, you can have a set_credentials.sh script in which users add their personal credentials to be exported as environment variables. They'll need to execute this before running any dbt command. To keep schemas separated between deployment and local development, the official documentation suggests using user specific schemas. You might not want to do this because you want to limit schema clutter or simply don't allow your users to create schemas. In this case, an alternative could be to always use a single sandbox schema for local runs. To do so, create a dbt/macros/generate_schema_name.sql file:

This overrides the default behavior of dbt. It adds a _sandbox suffix to the base schema name whenever the ENV environment variable is not set to dev or live. This will be the case on local runs. For deployment, we'll need to make sure to set it appropriately. One downside of this setup is that users can override each others tables in the sandbox by accident. To mitigate this, you can e.g. create an additional macro that adds a suffix to all tables names using the username.

We have mostly completed the programmatic part of the solution. Next, we'll learn how to setup the infrastructure on AWS that runs what we have built so far. I won't provide a complete solution here, as your setup will most probably be very different anyway. But I'll provide you with enough examples to get you going in the right direction.
First, we setup the ECR repository that will contain our Docker image (ecr.tf):

Nothing special here. Next, we configure ECS to run our Docker image as a task (ecs.tf):

Things to watch out for here are the execution_role_arn and task_role_arn roles and the network_mode. We'll come back to the network_mode later on, when we look at the Airflow DAG triggering the task. For now, let's define the two used service roles (roles.tf):

For both roles it is required to allow ECS to assume those roles. For the first one, also the role running Airflow will need to get this permission. This is because we want to allow Airflow to trigger our task later on. Now, lets look at the policies that we need to attach to the first role (policies.tf):

The somewhat tricky part is the regex used to get the ARN of the task without the revision suffix. Seems like there should be a better solution for this. But this works, so...
This should get you started in terms of the infrastructure. Let's automate stuff now!

We use Airflow to trigger the run of dbt on a schedule. Here's a possible template for a DAG achieving that (using Airflow v1.x):

We use the PythonOperator to call a function. The function will first assume the role we defined earlier in Terraform (DBTServiceRole-${var.project_name}). That's why we had to allow the service role that Airflow runs as to assume this role before. Then, the function will trigger a task run on ECS using this assumed role. Recall that we defined the network_mode of the ECS task definition as awsvpc (which is the only viable option for FARGATE). That's why we need to provide a network configuration here. To do so, we must specify appropriate values for ECS_TASK_SUBNET and ECS_TASK_SECURITYGROUP. Make sure that the task can access your db using this configuration. Otherwise, dbt will time out when trying to connect.
For bonus points, you can add callback functions that will share the run status. For example, posting those to a slack channel might be a good idea.

Your CI/CD Setup will depend on so many idiosyncrasies, that I'll just stick to a basic explanation. You go and figure out the rest (or ask your friendly DevOps person). What you want to achieve is this:

Other things you can do include running some checks, i.e. linters and formatters, in the build stage. I'm a fan of using pre-commit for that. You can not only check your Python code but also your terraform config and even dbt models (with SQLFluff).

After this post, you'll be able to build a production ready process for deploying dbt models on AWS that follows best practices. Automating the process by using CI/CD for deploying and Airflow for scheduling dbt will reduce the workload of your Analysts to a simple git push. This will definitely encourage the adaptation of dbt in your org. Consequently, allowing you to focus on extracting and loading data instead of dealing with transformations.
But watch out: Your Analysts might fall in love with you!